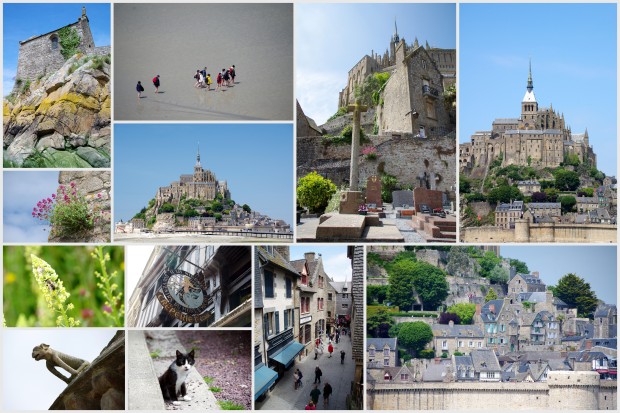 Le Mont-Saint-Michel is a 247 acre island community (population: 44) in the Normandy region of France.  The island has been inhabited since ancient times, and has been home to a monastery since the 8th century A.D. From Wikipedia (because I cannot say it better myself):  “The structural composition of the town exemplifies the feudal society that constructed it: on top, God, the abbey and monastery; below, the great halls; then stores and housing; and at the bottom, outside the walls, houses for fishermen and farmers.”  The island is accessible by foot during low tide but is completely surrounded by water at high tide.  There is a 46ft difference between high and low tide.  Le Mont-Saint-Michel is a UNESCO World Heritage Site and is visited by 3 million people each year.

One convenient thing about the main highways in France is that there are many signs for common attractions, so we always knew whether or not we were going the right direction.

As fans of Band of Brothers, we were excited to see a sign for Saint-Lô, a town mentioned in one of the episodes.