Étretat is a small town (population 1,461 + tons of tourists) in the Haute-Normandie region in the northwest part of France.  It is located on the English Channel along a portion of the coast called Côte d’Albâtre (Alabaster Coast).

During our planning stages we had discussed potentially visiting Étretat and had ultimately decided not to because we wanted to be able to spend more time in Bayeux.

We were sitting in the parking lot at Monet’s Gardens in Giverny, getting the GPS ready to go and made a rare, spur-of-the-moment decision to not follow our itinerary.  Instead of heading to Bayeux, as planned, we decided to drive to Étretat.  We had seen a couple of paintings featuring  Étretat (one by Claude Monet and another by Gustave Courbet) at the Musée d’Orsay, and the falaise d’Etretat (the cliffs of Étretat) were calling our name.  Visiting Étretat was the most spontaneous thing that my husband and I did during our very-well-planned-trip-to-France. 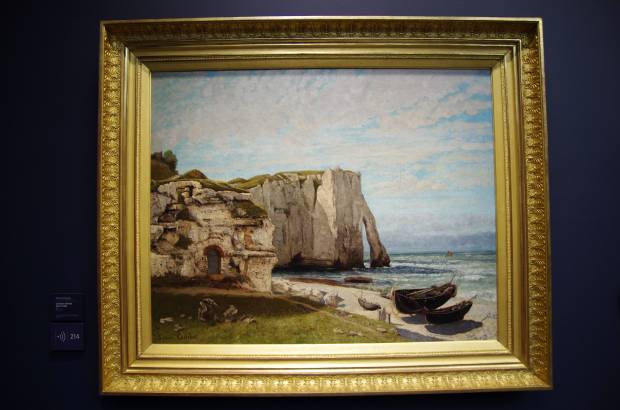 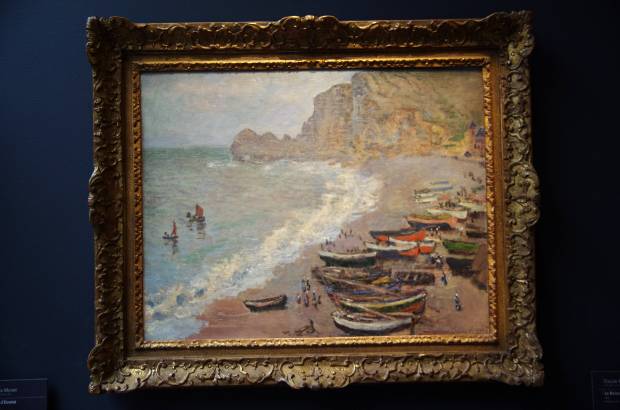 Here’s a link to the Imgur photo album containing the photos from this post.

We arrived in Étretat and parked just outside of town.  The walk into the town was beautiful.  I was excited to see some wildflowers I had never seen before.  Flowers seem to grow everywhere in France. 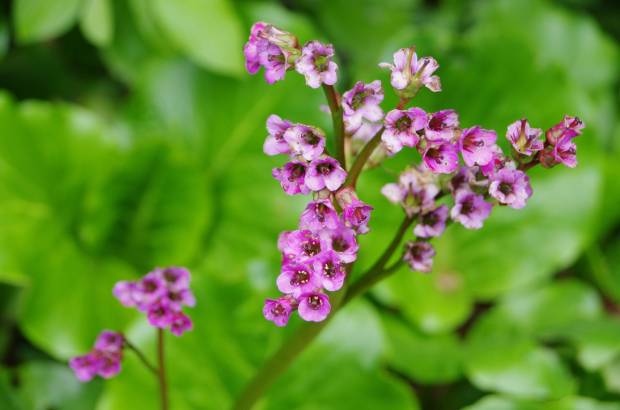 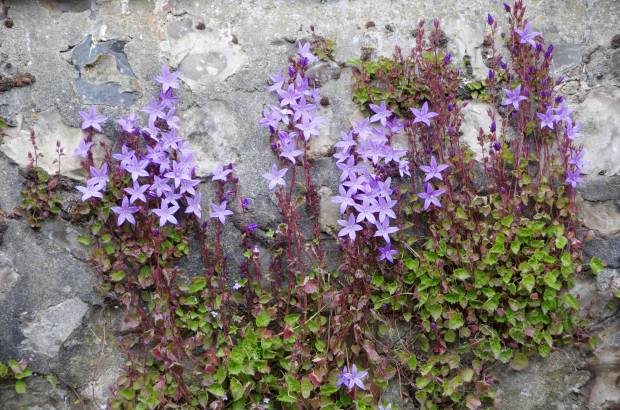 We stopped at the visitor’s center to get a map, though that ended up being completely unnecessary.  Once we got into town, the way to the cliffs was evident — there were so many people making the short hike up the cliffs.  The cliffs were every bit as breathtaking as I had imagined.  I can see why so many painters have painted these majestic cliffs over the years.

If I was a painter, this is the scene I would have chosen to paint.  Maybe someday I’ll use the watercolors I purchased on a whim shortly after our trip to France. 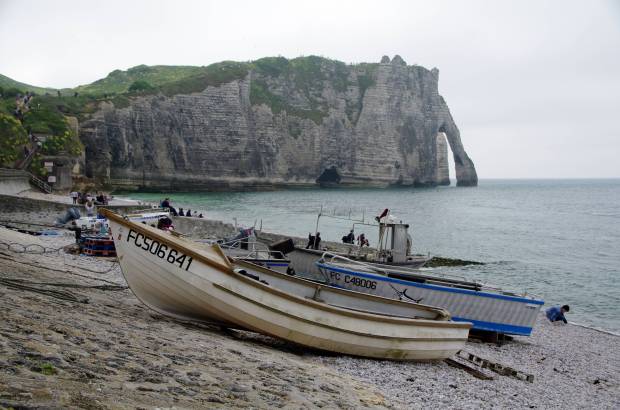 The beach was made up of pebbles, worn smooth — and, oh, how I wanted to take one home with me!  I resisted the urge, though, because of a sign that I saw near the beach discouraging people from taking rocks in order to preserve the beach and protect the town. 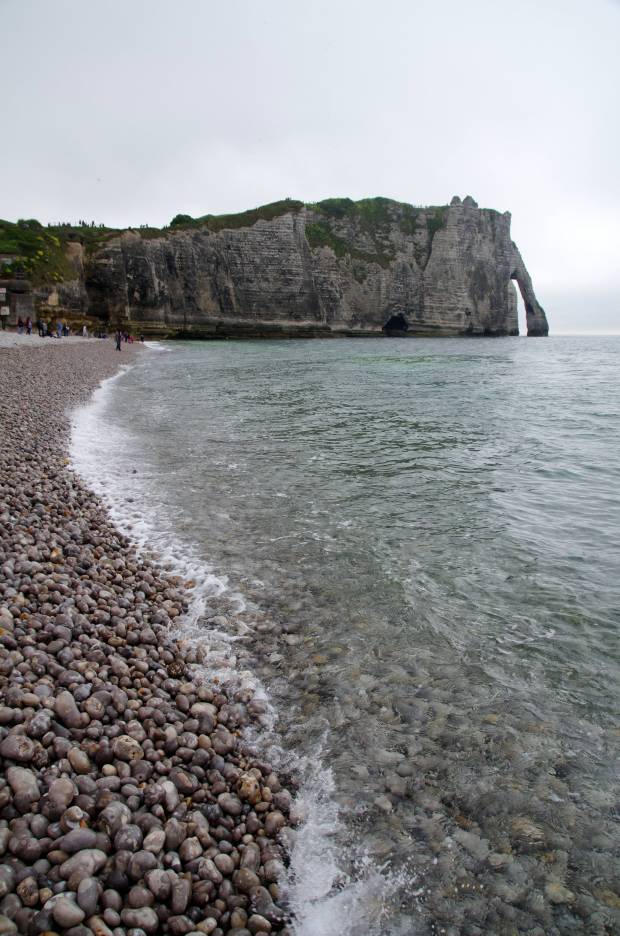 There are four main formation along the Alabaster Coast at Étretat.  A rocky pillar known as Aiguille (the needle) and three arches (Porte d’Aval, Porte d’Amont, and Manneport).  We were able to see all four of the formations during our short hike. 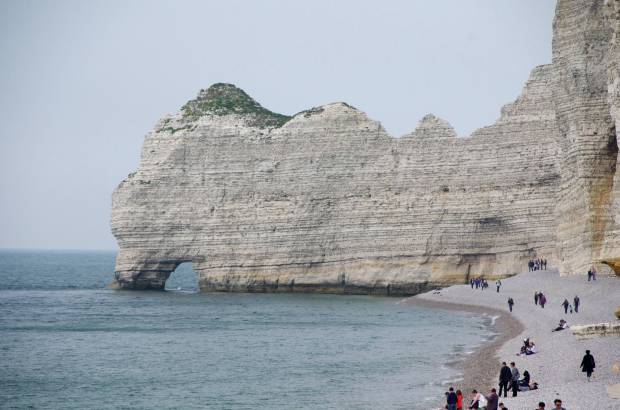 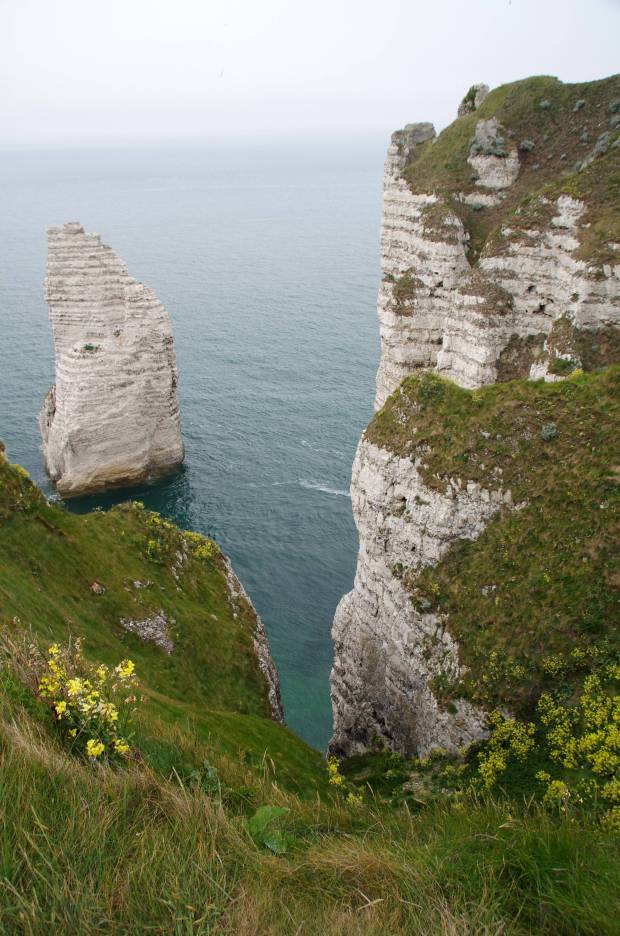 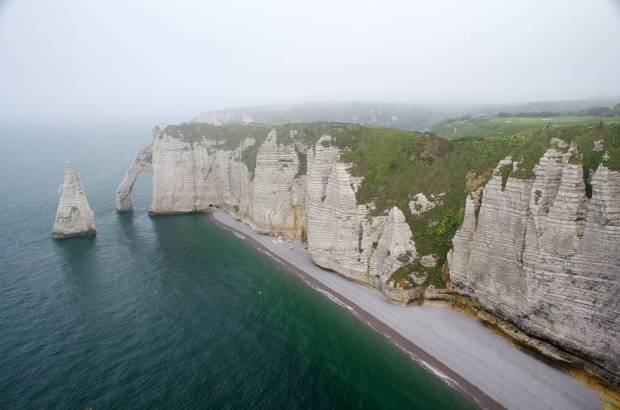 Porte d’Aval & Aiguille (from the West) 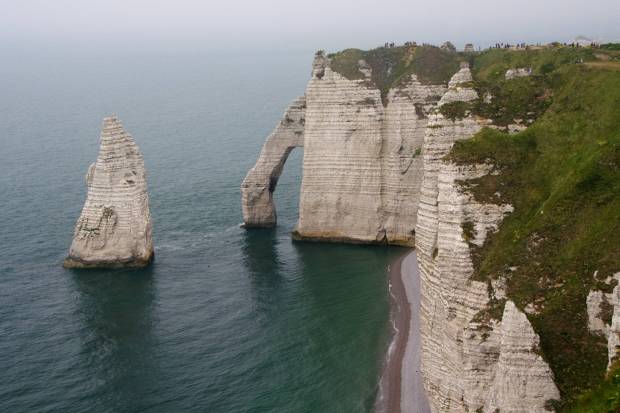 Close-up of Porte d’Aval & Aiguille (from the West) 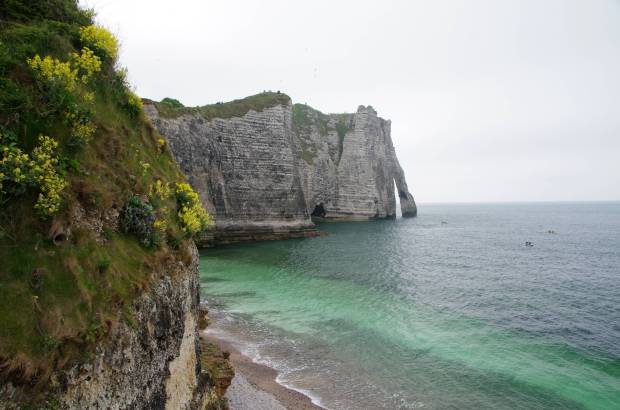 Porte d’Aval (from the East) 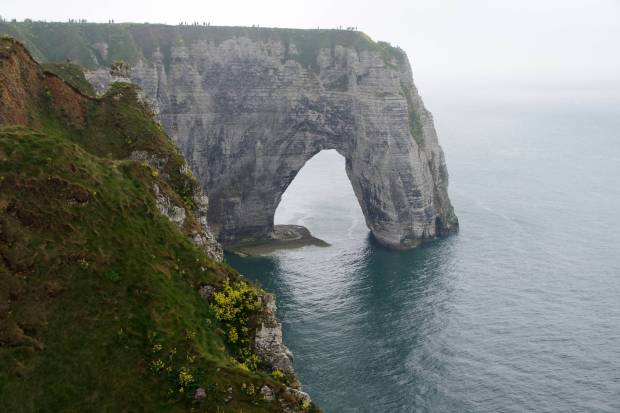 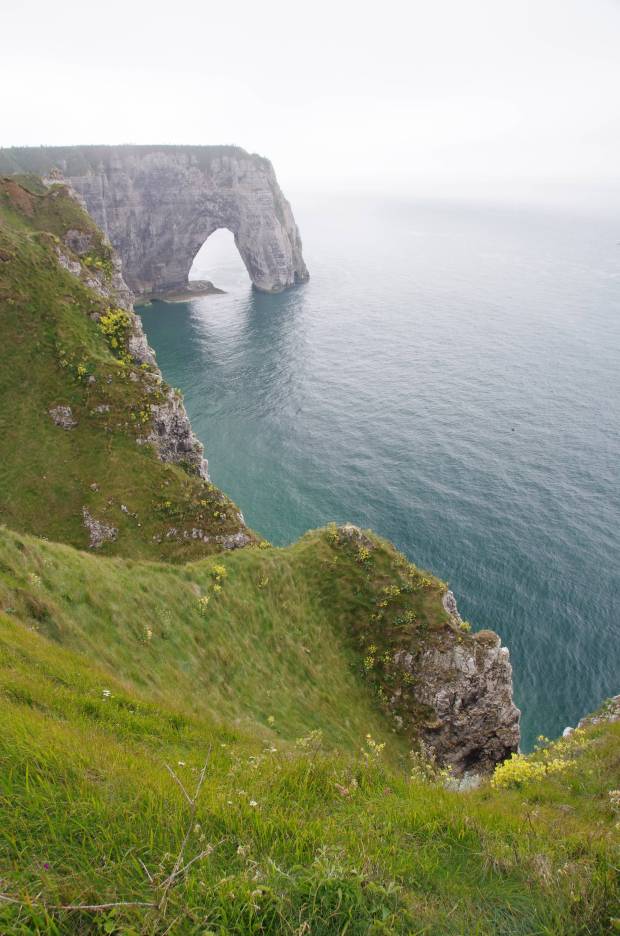 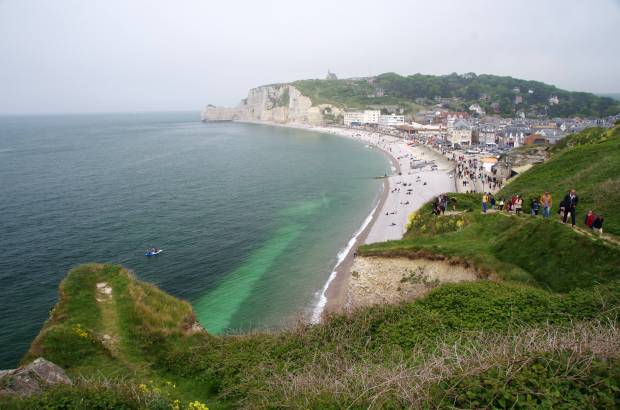 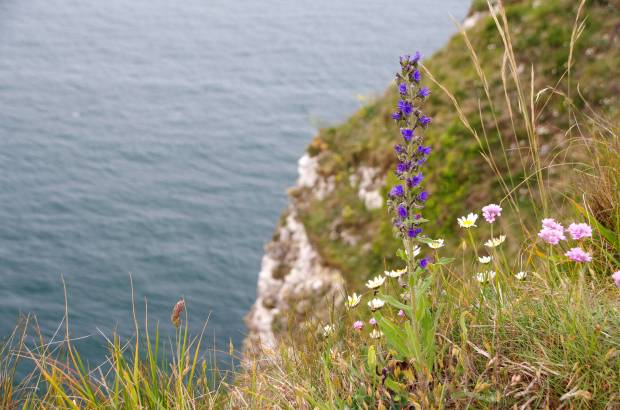 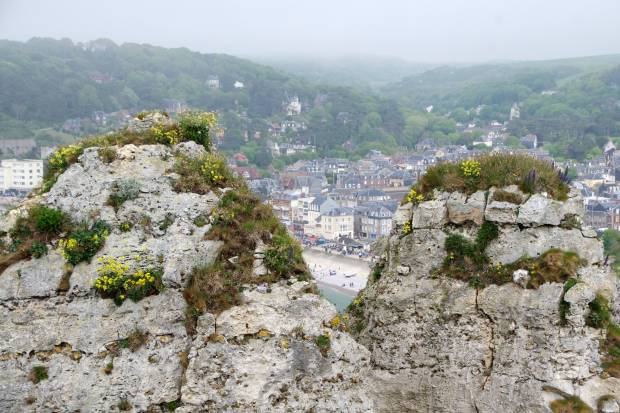 The cliffs with Étretat in the background

What an adventure it would have been to get to sail along the coast of Étretat! 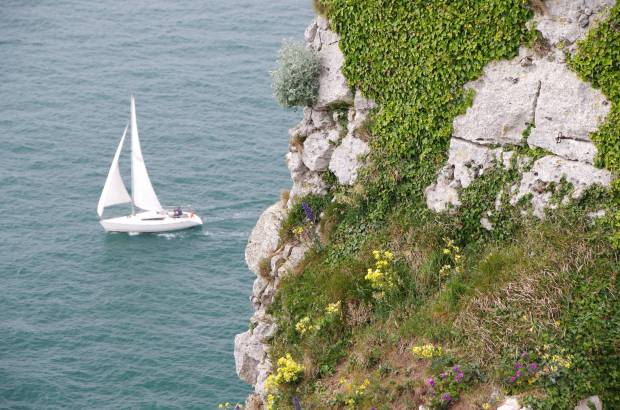 “One is too taken up with all that one sees and hears in Paris, however strong one is, and what I do here [in Étretat] will at least have the merit of being unlike anyone else, at least I believe so, because it will simply be the expression of what I, and only I, have felt.” -Claude Monet