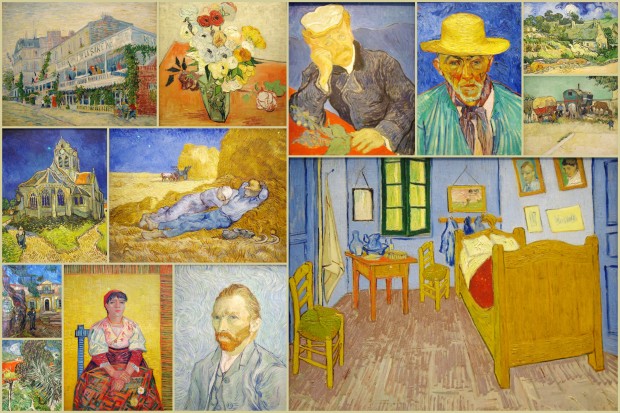 I’ve loved Vincent Van Gogh’s paintings since I was in elementary school.  My elementary school P.E. coach, Georgia Moore, was passionate about art and literature, and all of her students benefited from her knowledge.  I have vivid memories of our Friday Humanities classes (Humanities replaced P.E. on Fridays).  I remember learning about Shakespeare, Matisse, and Van Gogh.  I remember going home and telling my parents about The Starry Night — they bought me a framed copy of it shortly there after for getting all As on my report card.  In addition to The Starry Night, I specifically remember learning about his sunflower paintings, Bedroom in Arles, and Self Portrait with Pipe and Straw Hat.  At the Van Gogh Museum in Amsterdam I learned that he painted so many self-portraits because he wanted to practice painting people but couldn’t afford to pay people to model for him.  His work didn’t become highly regarded until after his death.

I had never heard of Paris’ Musée d’Orsay, but upon finding out about their many Van Gogh paintings, I know that the Musée d’Orsay had to be part of our itinerary.  We visited Musée d’Orsay on our second day in Paris, and the museum, as a whole, was fantastic.  We got there right when the museum opened, so it wasn’t very crowded.  I relished being able to examine the Van Goghs in near-solitude (much unlike when I saw The Starry Night at The Museum of Modern Art in New York City).

The photographs in this post were all taken at Musée d’Orsay.  Someday I’ll have to write additional blog posts about the other Van Gogh paintings I’ve had the opportunity to see.

This self-portrait (below) is suspected to be Van Gogh’s last self-portrait.  He painted it during September 1889 and gave it to his beloved brother, Theo.  He died on July 29, 1890.

The Church at Auvers
June 1890

One of the things that I enjoy the most about seeing Van Gogh’s paintings in person is being able to see the texture of the paint with my own eyes.  Seeing it in person allows you to see all three dimensions of his paintings.

Close-up of Thatched Cottages at Cordeville
1890

Close-up of Thatched Cottages at Cordeville
1890

The Siesta (After Millet)
January 1890

The glass (and lighting in the room) on the painting in the next photograph made it difficult to get a good picture; however, the colors in this painting were too pretty for me to exclude it.

Starry, starry night
Paint your palette blue and gray
Look out on a summer’s day
With eyes that know the darkness in my soul

For they could not love you
But still your love was true
And when no hope was left inside
On that starry, starry night

You took your life as lovers often do
But I could have told you, Vincent
This world was never meant for one
As beautiful as you