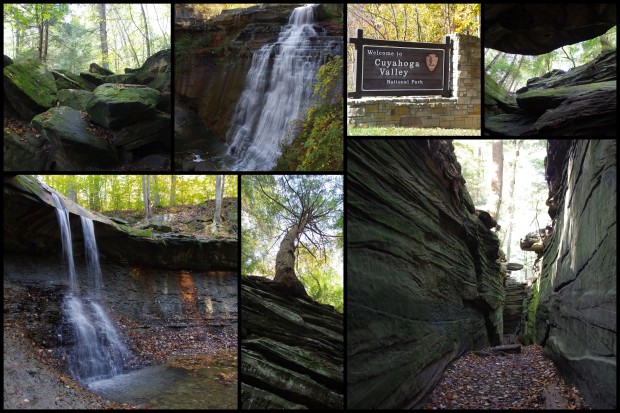 We did three different hikes during our day at the park.  First on the list was Blue Hen Falls.  Blue Hen Falls was fairly small, about 15 feet tall according to the National Park Service website and is formed by a small stream.  The sandstone shelf that forms the waterfall, however, is picturesque, and the hike to the water fall is short, so it’s worth seeing if you’re visiting the park.  It was especially pretty during October because many of the trees in the area were changing colors.

Brandywine Falls was beautiful, though it wasn’t exactly the type of hike we expected.  A well-maintained boardwalk leads to the falls, and a road is visible above the falls (I did my best to take my photographs at an angle that hid the road).  It felt a little more commercialized (and a little less “wild”) than we expected.  In addition to walking to the waterfall, we continued on to complete the entire Brandywine Gorge Trail.  There wasn’t much to see on the trail, and we would recommend just seeing the waterfall and spending your time hiking elsewhere.

Our last hike of the day at Cuyahoga Valley National Park, Ritchie Ledges, was my favorite of the three that we were able to do.  The ledges are sandstone cliffs.  Some of the cliffs are close together — giving the feeling that you’re walking through a tunnel when you walk between them.  Moss and trees grow on the rocks, giving the area a magical feeling.  Getting off of the trail and exploring the may crevices allowed us to see more of the area.

A Tree Growing Out of the Sandstone Ledges