Bryan and I found out that we were pregnant on December 14, 2016.  We were preparing to go to the airport to catch our flights to NYC.  Based solely on statistics, we had expected that it would take longer for us to get pregnant than it did.  It’s always exciting to leave for a trip, but the news that we were expecting a little one made that day even more exciting! 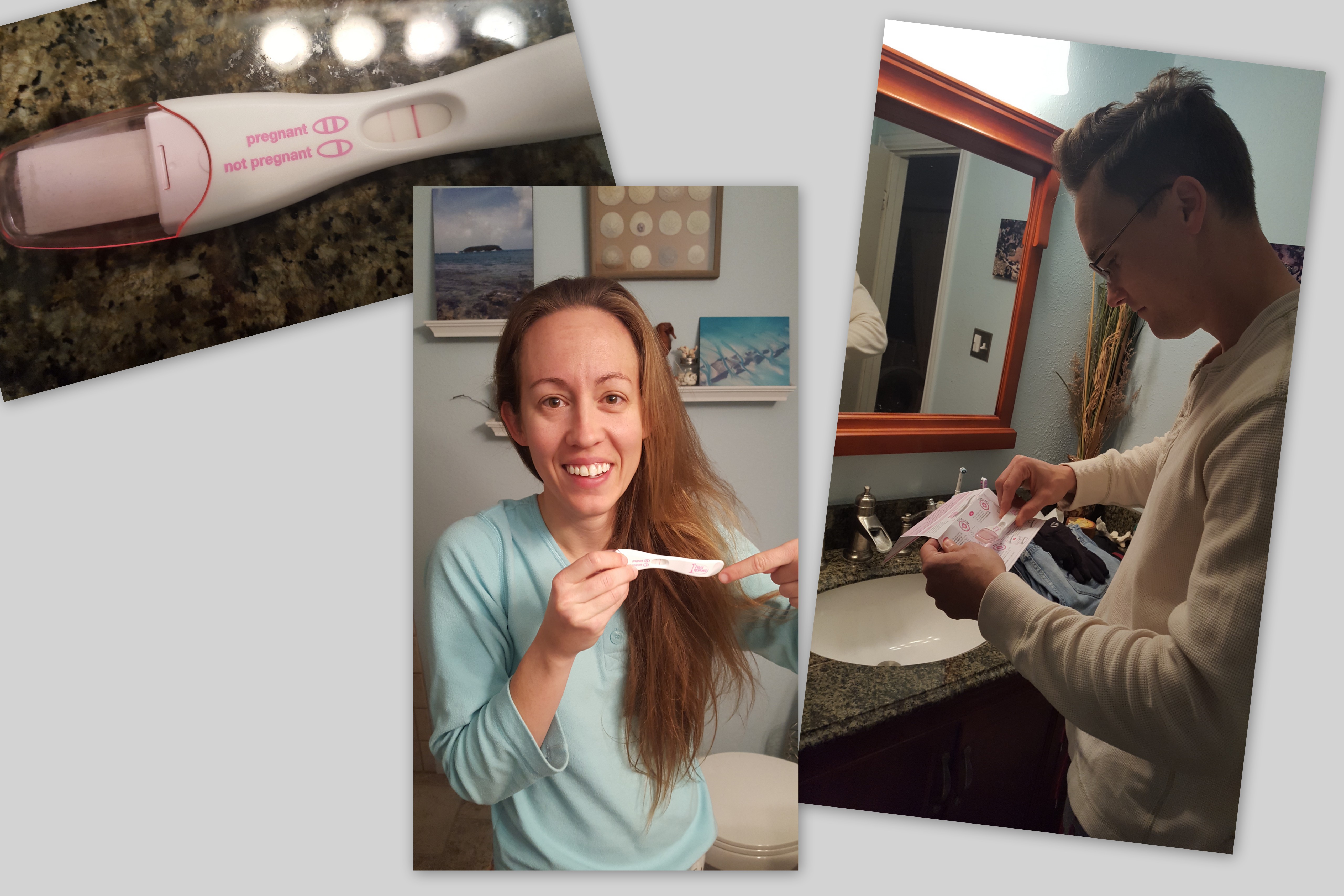 We saw our sweet baby for the first time on January 24, 2017.  Margot’s heart rate was 172 BMP and she measured just 3.1 cm long from the top of her head to the bottom of her tailbone. After waiting for 10 weeks, it was so wonderful to hear her heart beating and to receive confirmation that our little one was alive and well! 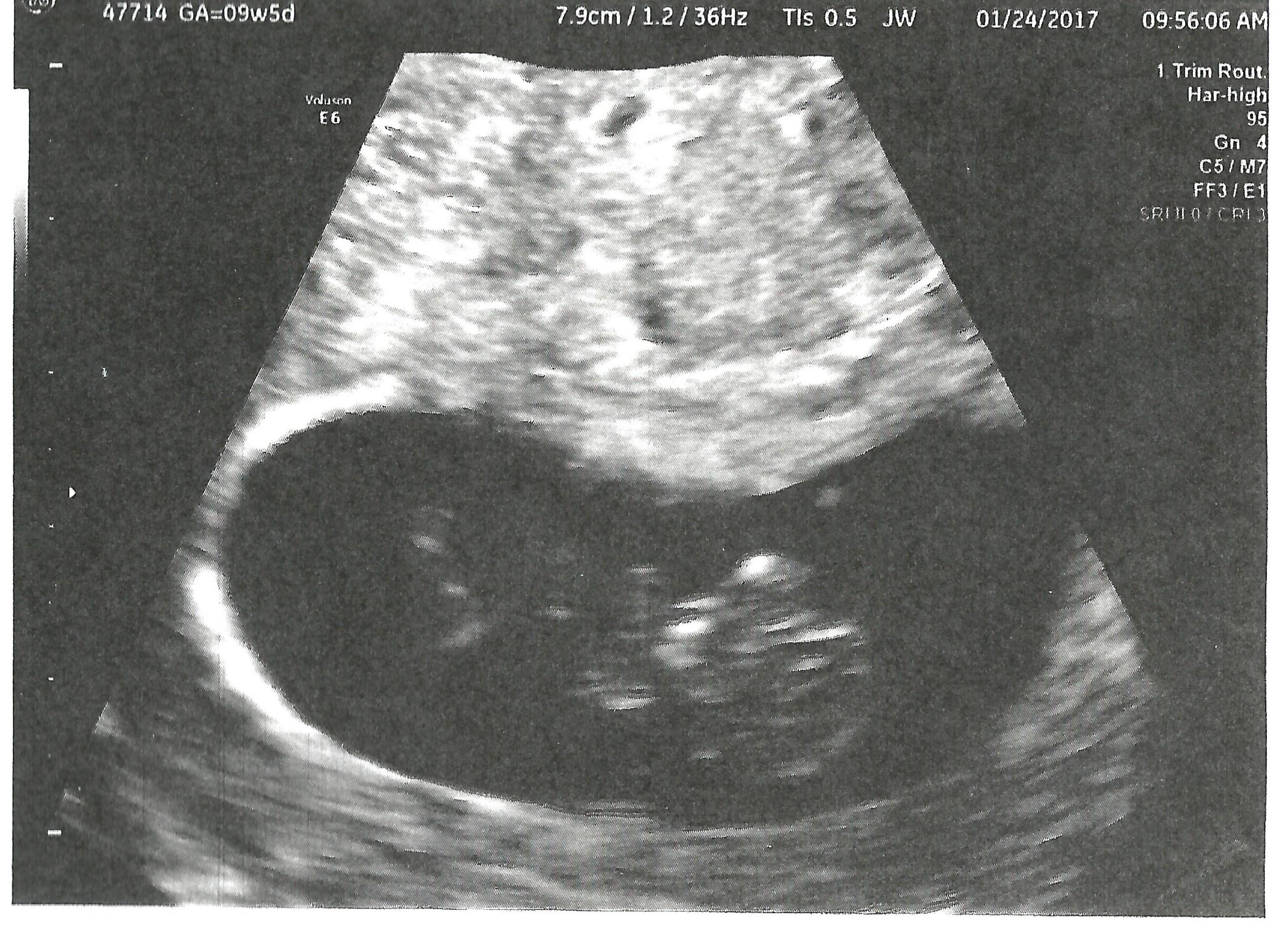 On January 29, 2017, we “went public” with our pregnancy.  We know we’ll still be able to travel with a little one (in her first 3 months Margot has already been to 5 states)…we just thought this would be a funny way to make the announcement. 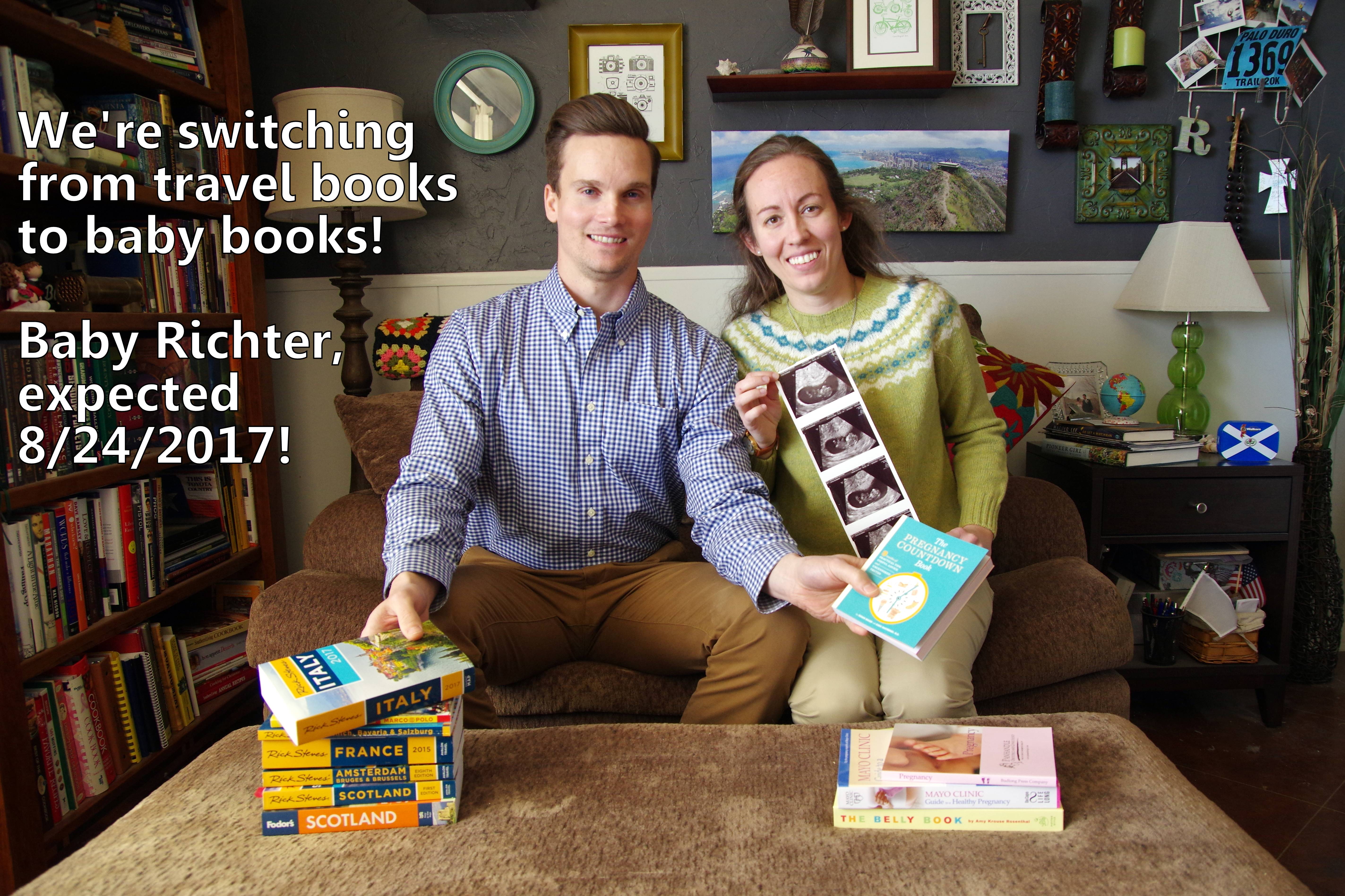 All in all, the first trimester was pretty miserable for me.  I took 4 Diclegis pills a day and still threw up fairly regularly in the morning and in the evening and at night.  I was very tired, and oftentimes Bryan would come home from working out to find my asleep on the couch.  Most food sounded terrible, though I was able to eat ground beef, McDonald’s burgers, canned peaches, popcorn, plain Cheerios, grape juice, grilled cheese sandwiches, and peanut butter toast.

On February 16, 2017, I took my first bump photo! This was prompted by a neighbor asking if I was pregnant when she saw Bryan and me on a walk one evening. I diligently took a bump photo every week that I was pregnant. 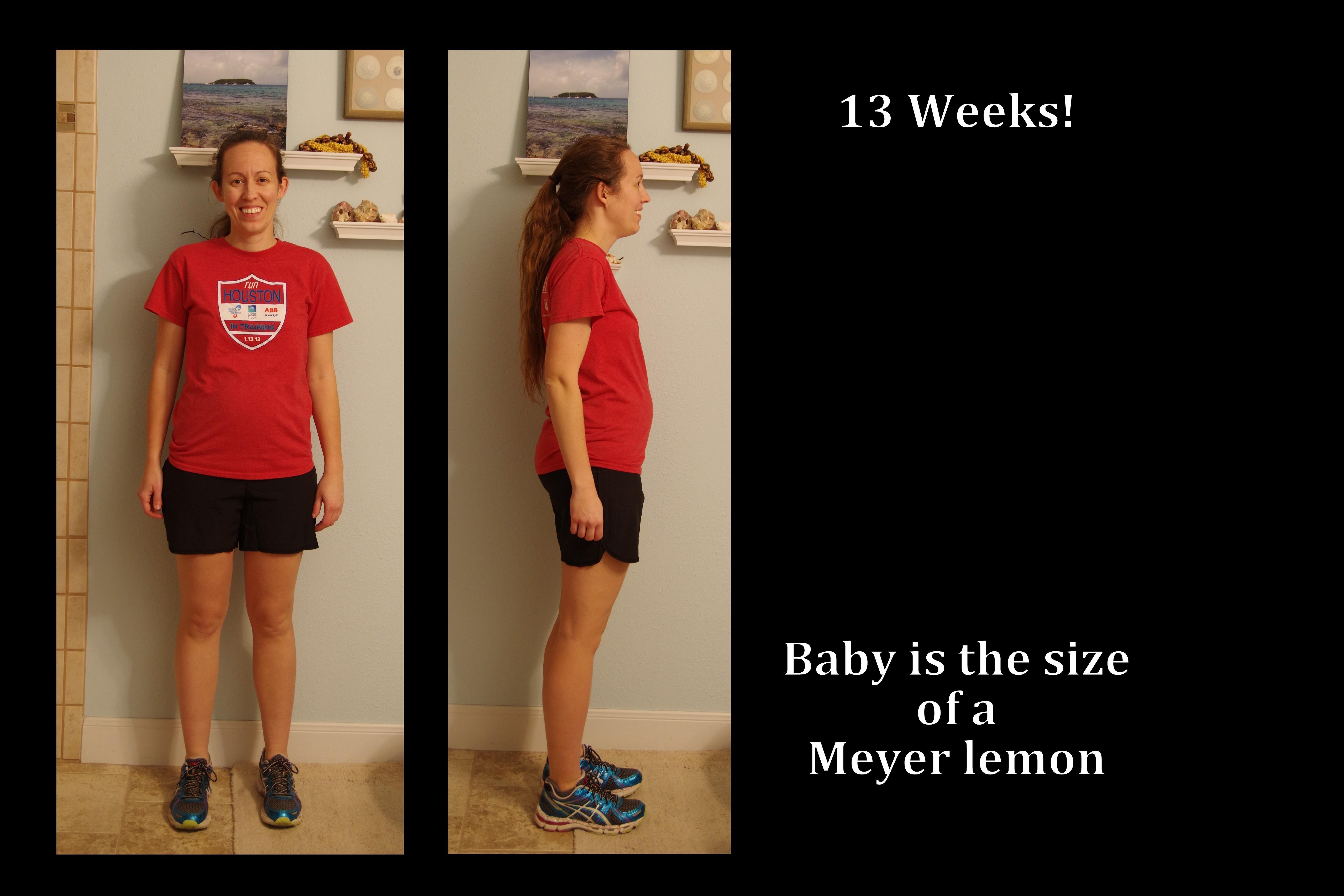 On March 27, 2017, my PA-C arranged for us to have a “quick, free” ultrasound so that we could find out baby Richter’s sex.  We were so excited to finally learn what we were having — now we could start buying things to prepare for our baby’s arrival!  Our small group from church threw us a gender reveal party — such an unexpected and fun surprise! 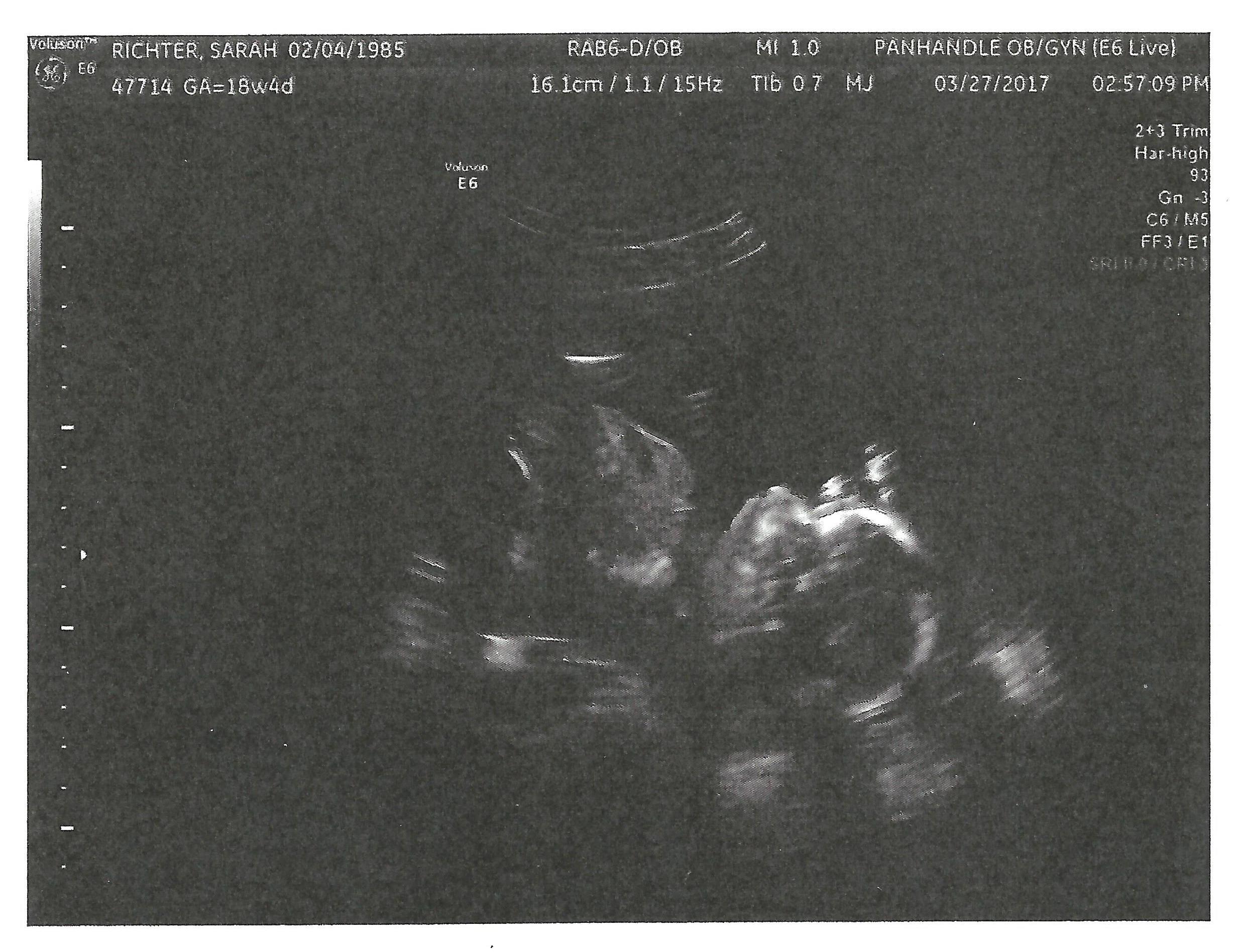 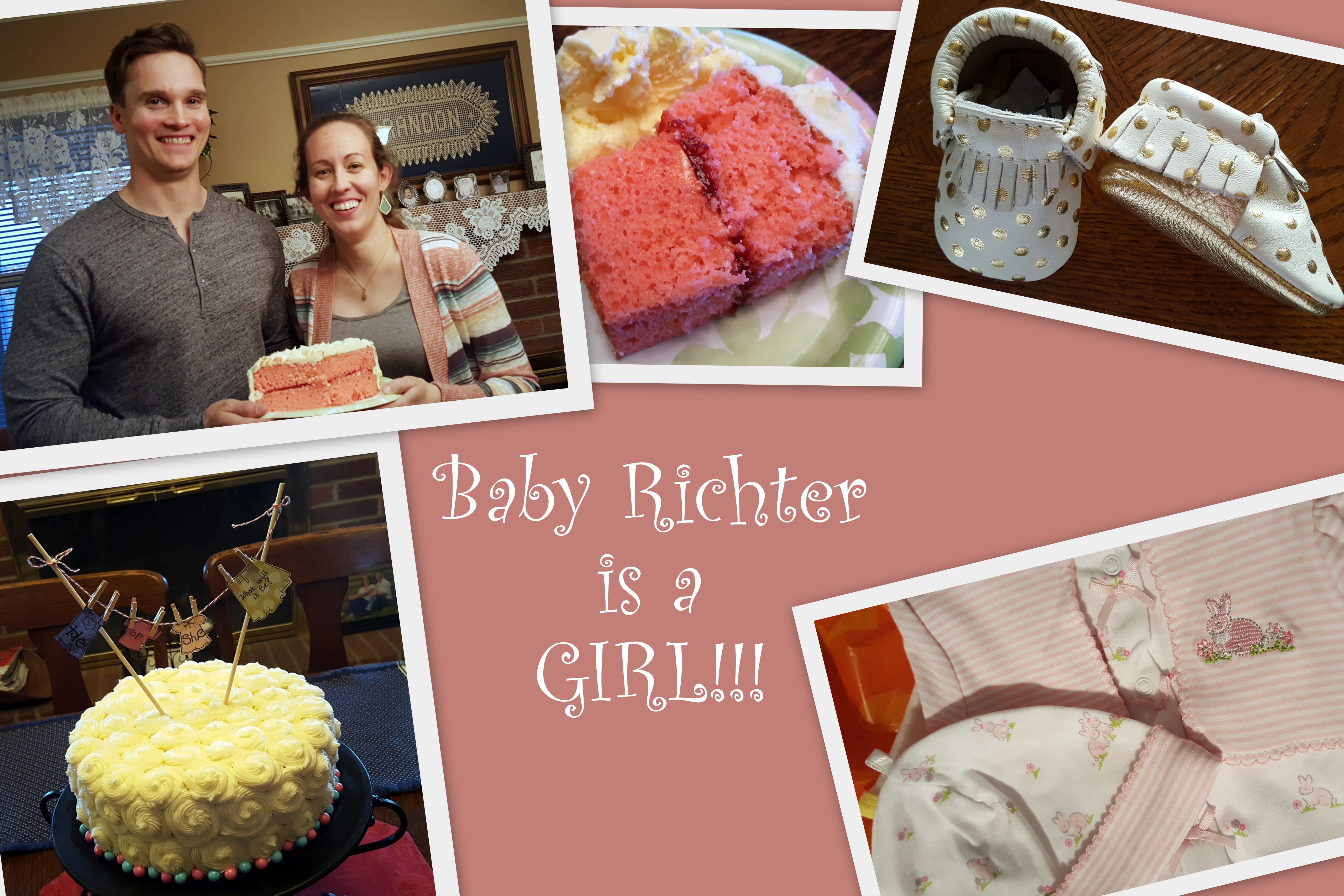 On May 16, 2017, (25 weeks pregnant) Bryan and I flew to Florida for our babymoon. We had a wonderful time playing in the gulf and eating tons of seafood and ice cream. We also picked out some special gifts for our sweet girl at the nearby outlet malls and a few local shops. 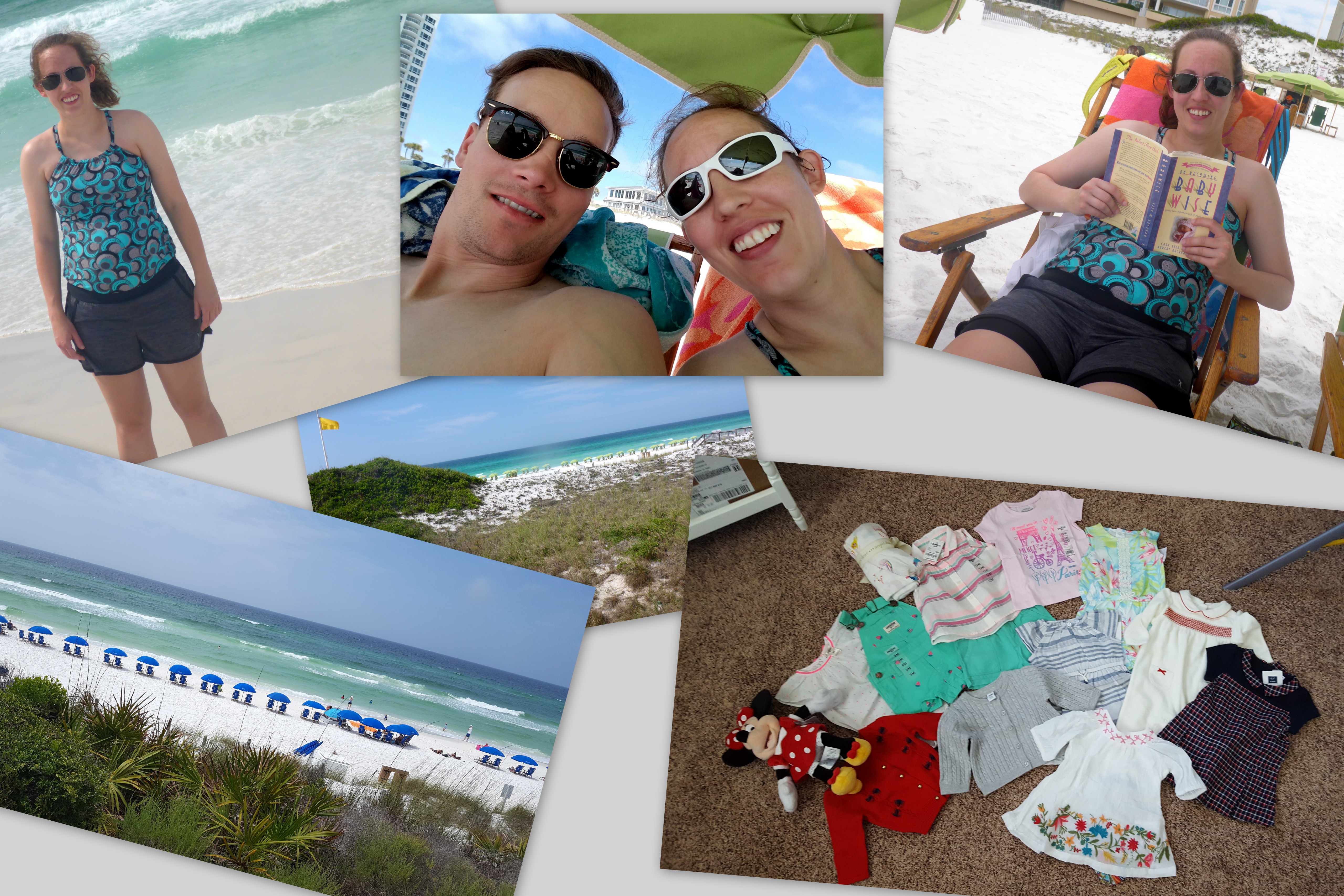 Our baby shower was on June 17, 2017.  A group of 9 friends from our church threw it for us, and they couldn’t have done a lovelier job.  A back patio in Borger, Texas, was magically transformed into an outdoor Parisian cafe.  The food and decorations were perfect, and so many people came to help us celebrate the impending arrival of our sweet, little girl! 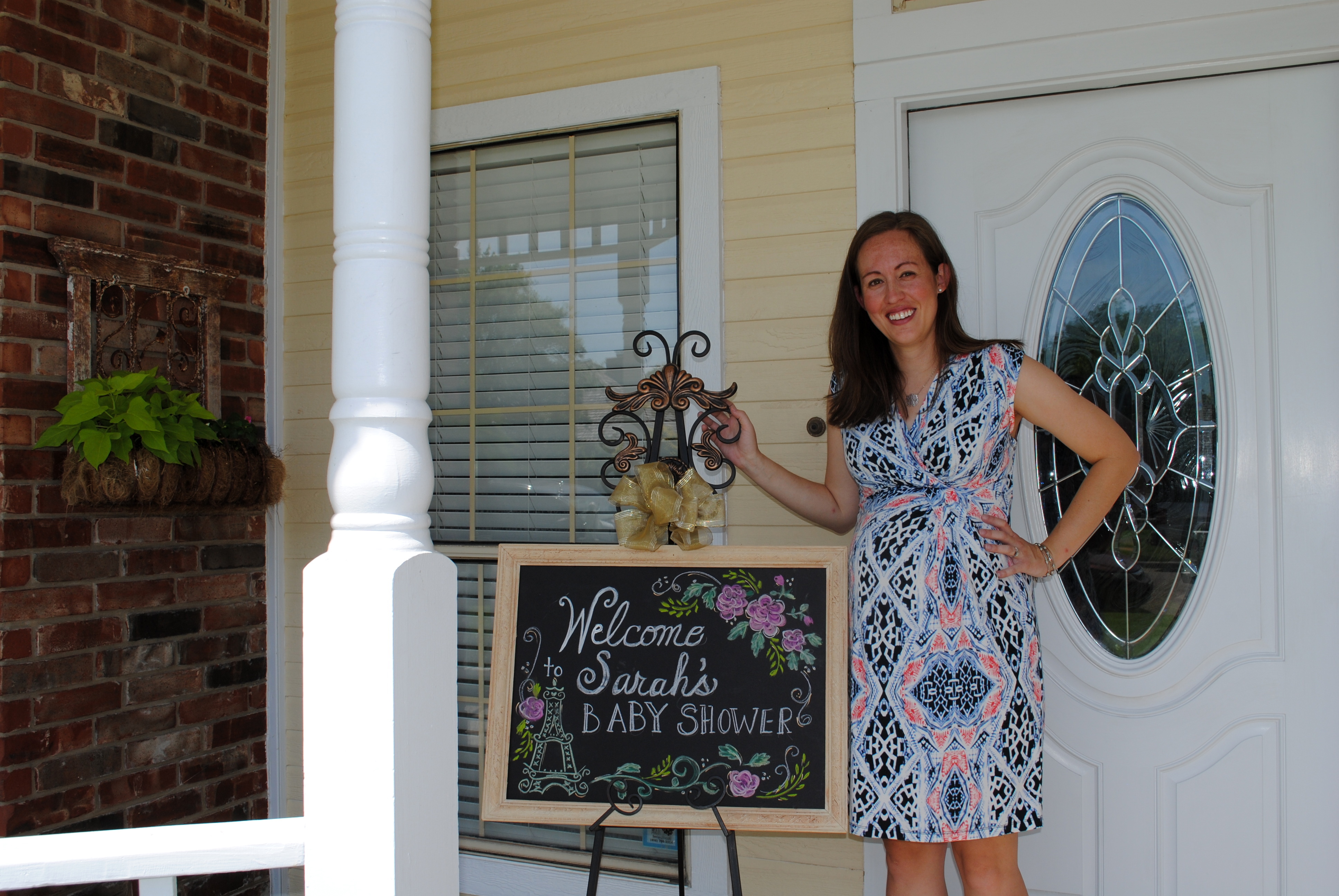 On June 24, 2017, the weather was perfect — overcast, no wind — for me to take a few maternity portraits of Bryan and me.  I still need to go back and edit them…as of now, this is the only one that I’ve edited (spare time is uncommon these days). 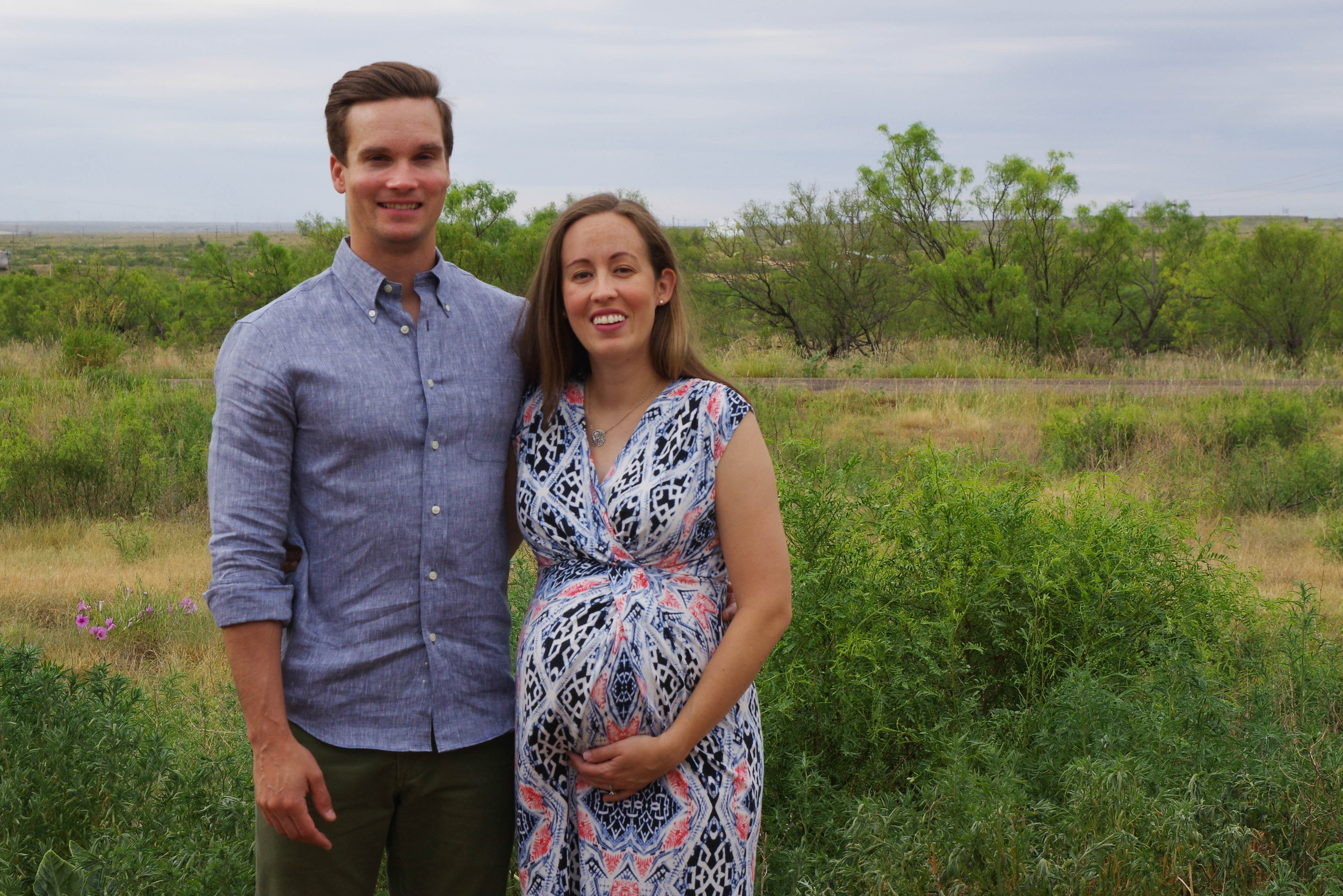 The nausea continued throughout the rest of my pregnancy but was manageable thanks to my Diclegis prescription.  Beginning around July 16, 2017, the palms of my hands and the bottoms of my feet started itching badly.  I remember one night I went to bed at 10 PM and was still awake at 3:30 AM (which is super abnormal for me) because of the severity of the itchiness.  On July 20, 2017, I learned about cholestasis.  Someone in my online pregnancy group posted a complaint about being itchy, and several people told her that she should be tested for cholestasis.  I promptly called my doctor’s office freaking out (the only time during my pregnancy that I lost my cool), so they had me come in that morning for a blood test.  My next appointment was on July 25, 2017, and at that appointment I learned that my results came back normal.  The nurse practitioner who saw us that day (the PA-C I had been seeing was out of town) went ahead and ordered another blood test just to make sure that everything was okay.  They told us that they’d call us if anything was normal.

We didn’t hear anything from them, so at our next appointment on August 3, 2017 (my 37 week appointment), we thought that everything was good.  The nurse who worked with our PA-C came in to see us just like she always did.  She asked if I wanted to have a cervical check done to see how things were progressing, and, naturally, I declined.  When I declined, she said, “I think you’re going to have one anyways because Haylee is going to want to induce you.”  At that point Bryan and I were worried because we had no idea what was going on.  Haylee, my PA-C, came in and explained what was going on.  The bile salt levels from my second blood test came back “dangerously high,” and I had been diagnosed with cholestasis.  Cholestasis is a condition that pregnant women can get that impairs the flow of bile from the liver.  While it poses no threat to the mother, it can make the womb a toxic environment for the baby and ultimately increases the risk of the baby being stillborn.  For that reason, women who are diagnosed with cholestasis are frequently induced at 37 weeks.  It was then that we learned we were going to be induced the next day.  We hadn’t even pre-registered at the hospital or packed our hospital bags yet.  We had 20 hours to complete many of the things that we thought we had at least 3 weeks to get done.

As I look back on that day, I can see God’s provision for us.  The only reason Bryan was at that appointment was because I had scheduled our hospital tour and preregistration appointment for that day — otherwise I would have learned this news completely alone.  Haylee did a cervical check after all, and I was dilated 3 cm.  This was a complete shock because I was not aware that I had been having contractions.  For that reason, we were granted one more night at home before being induced.  Had I not been dilated, we would have spent the night in the hospital.  The whole time that I was pregnant, one of the things that I was most paranoid about is what we were going to do with my sweet Tibby-Lou when it came time to deliver the baby.  I called our vet in Borger right after my appointment ended, but they didn’t have any openings.  I tried the vet in the next town over, and was so thankful that they had a spot for Tibby at such late notice — I would have been so worried about her if either of the vets hadn’t had a spot open to board her.  We called our parents to let them know what was happening, and my parents were able to leave that evening so that they could be with us when I was induced.  I look back on that day, and I see God’s hand on everything.  He took care of everything that I was worried about…my husband was with me, my dog was safe, my parents were there…He orchestrated everything.  God definitely revealed himself as Jehovah Jireh, God our Provider, during that time.

That evening I took my final bump photos. 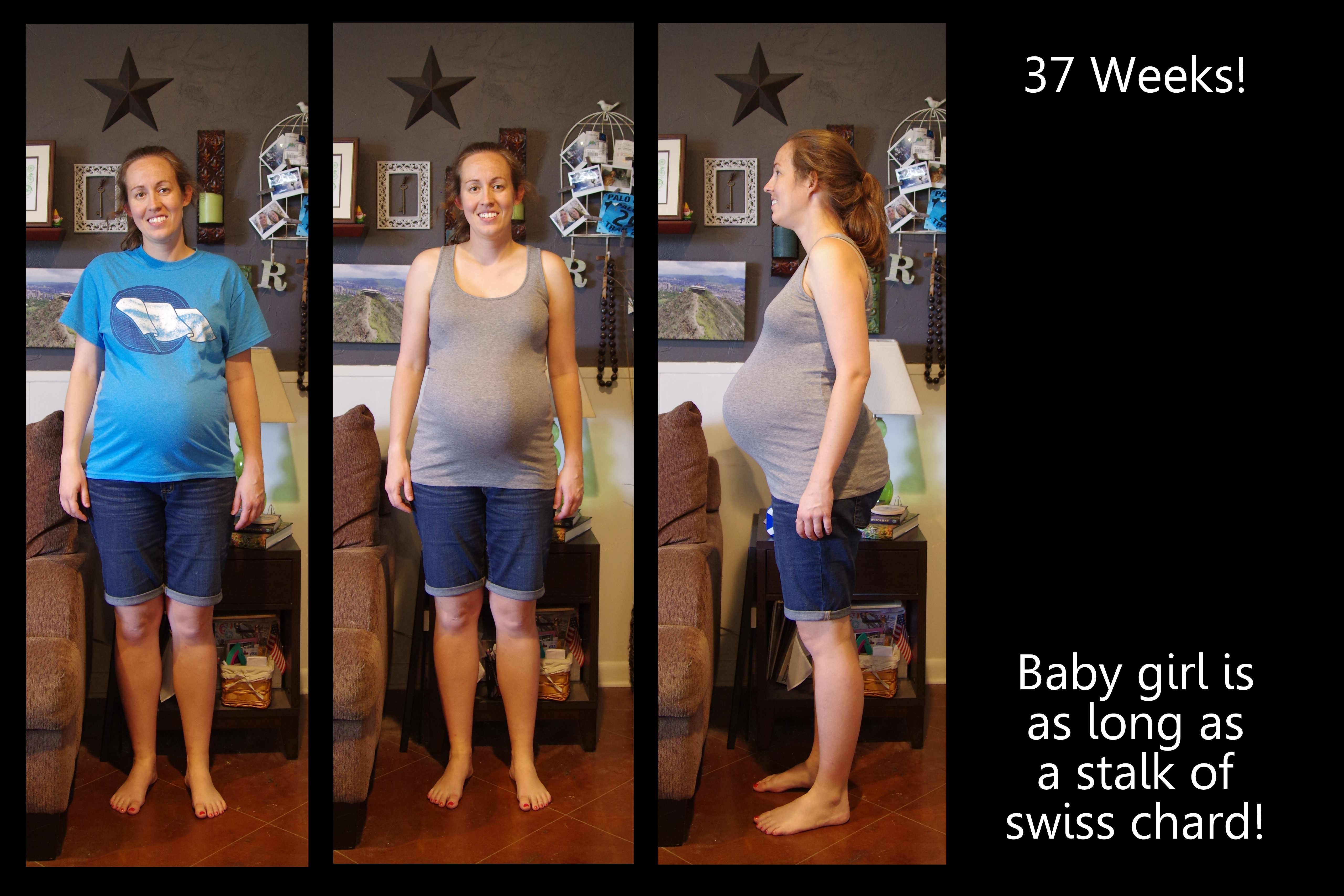 The most painful part of Margot’s delivery for me was getting the IV.  It took multiple tries, and they blew out one of my veins in the process.  The epidural was magical, though it did take quite awhile for the feeling in my right leg to come back.  I was only in labor for about 5 hours when Margot made her arrival (much to everybody’s surprise), and I only had to push 5 times.  Praise the LORD that she was completely healthy and didn’t have any complications from my cholestasis! 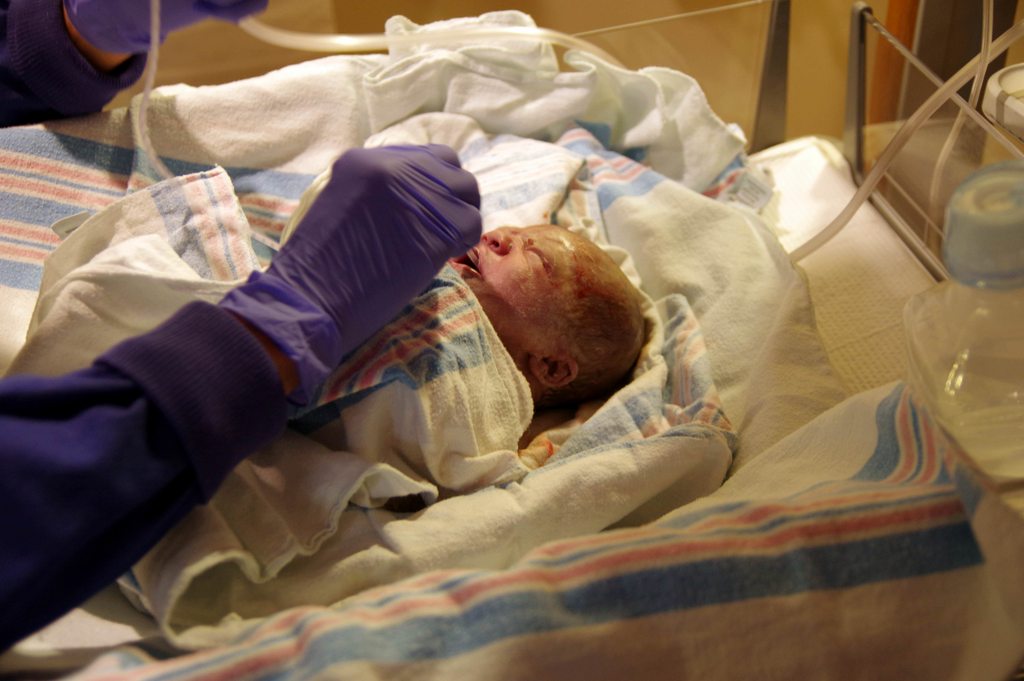 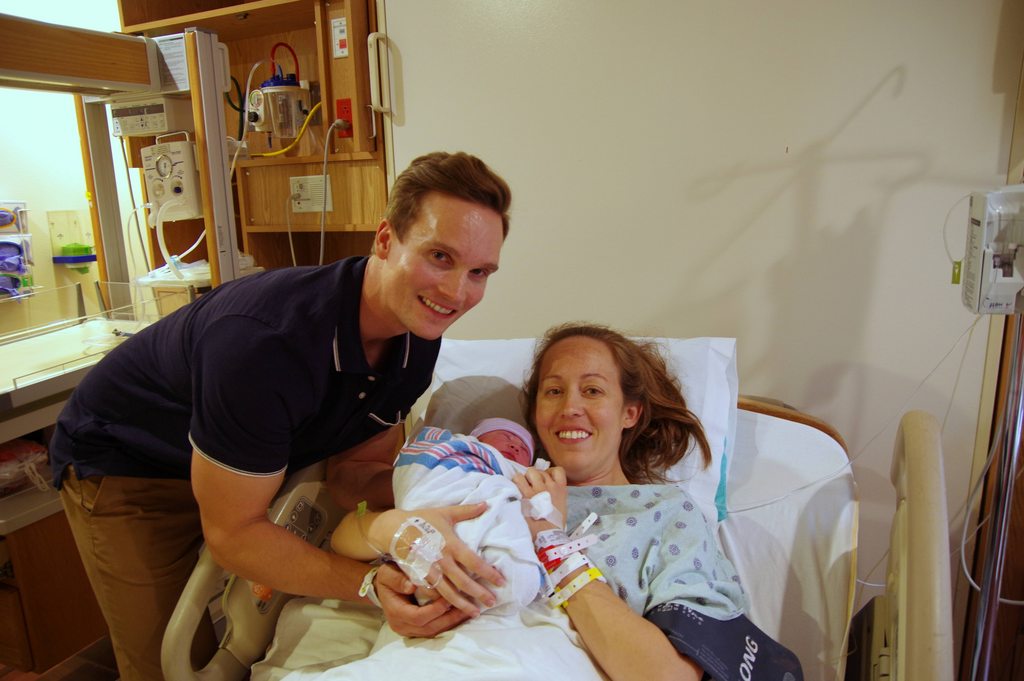 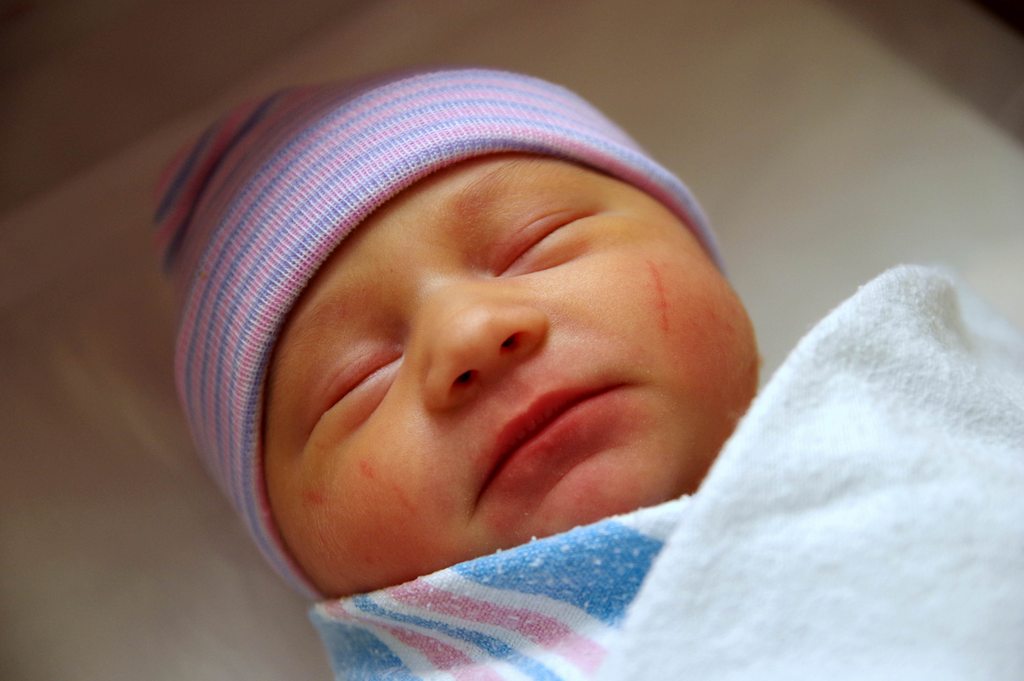 One thought on “Our Pregnancy – From Beginning to Birth”