Margot typically naps from 1.5 – 3 hours a day, and I’ve been using every bit of her nap on fruitless, earthly pursuits (cleaning, trying to find the perfect pink ink, browsing sewing patterns, sewing, looking at clothing online, reading, etc.).  Last night, as I was saying my prayers in bed, I prayed that God would help me with my current lack of discipline — that He would create in me a desire to spend time with Him.

He answered that prayer quickly and in an unexpected way.  The nose for Margot’s Mr. Potato Head has been missing for a couple of months, and it’s been driving me nuts.  This particular set came with several mouths and sets of eyes, but it only came with one nose, and he has this super adorable handlebar mustache that is useless without his solitary nose!  This afternoon, Margot opened a tin, and there it was — the missing nose.  I was elated to find the missing nose!

I was thinking about the FOUND nose, and the FFH song “You Found Me” (from way back in 2003) popped into my head, and it was just this blatantly obvious prompting that could have only come from God — reminding me that He has already FOUND me and that I was made to commune with Him.  And I knew that during today’s nap I HAD to spend time with God.

I gave my friend Christine this book of devotionals geared towards moms for her birthday, and I mentioned that she needed to tell me if it was good so that I could know whether or not I should buy it for myself.  She did one better than that and bought me my very own copy for Christmas — and it’s the perfect thing for this season of life.  The entries are short but insightful, and there’s a place at the end of each entry for self-reflection.  I opened it up today, and the title of the lesson was A Place of Peace.  The point of the lesson was that, as moms, we’re called to be peacemakers in our household; we cannot be peacemakers when we’re not filled with His peace…when we’re not making spending time with God a priority.  This lesson being the next one in the book was no coincidence — it was definitely God-ordained (just like the resurfacing of Mr. Potato Head’s nose).  The lesson led to me diving into Bible verses about peace:

“Blessed are the peacemakers, for they will be called children of God.” – Matthew 5:9

“So then we pursue the things which make for peace and
the building up of one another.” Romans 14:19 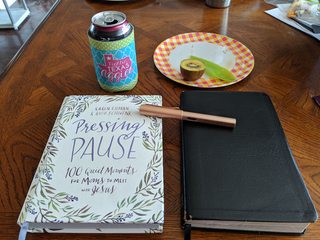 How can I build my daughter and husband up when I myself am not willing to pursue God’s peace in my own life?  By not making him a priority, I’m doing both myself and my family a disservice.  And I feel convicted.  I know that going through seasons of spiritual drought is normal, but I take no comfort in that.  I pray that my newfound conviction lasts.  I am so thankful that Margot found Mr. Potato Head’s nose — through it, I found God again. My very own proof that God meets us where we are.

A side rabbit trail…did you know that “God works in mysterious ways” is not a Bible verse?  I was researching that saying as I was preparing to write this entry.  It is actually from a poem written in 1773 by William Cowper called Light Shining out of Darkness.  It’s a beautiful poem, so I wanted to include it here.

1
God moves in a mysterious way,
His wonders to perform;
He plants his footsteps in the sea,
And rides upon the storm.
2
Deep in unfathomable mines
Of never-failing skill,
He treasures up his bright designs,
And works his sov’reign will.
3
Ye fearful saints, fresh courage take,
The clouds ye so much dread
Are big with mercy, and shall break
In blessings on your head.
4
Judge not the Lord by feeble sense,
But trust him for his grace;
Behind a frowning providence
He hides a smiling face.
5
His purposes will ripen fast,
Unfolding ev’ry hour;
The bud may have a bitter taste,
But sweet will be the flow’r.
6
Blind unbelief is sure to err,
And scan his work in vain;
God is his own interpreter,
And he will make it plain. 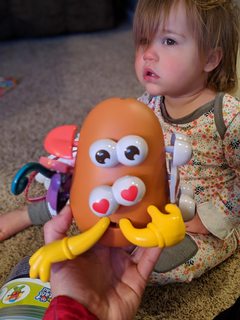 Margot did this all on her own while I held the potato for her.